When it comes to assault rifles, the first thing players can think of is the M416 in the “PUBG Mobile: Stimulus,” which is a high-performance rifle. However, because there are too many players to include them in the category of preferred weapons, and guns require more accessories, it is difficult to obtain accessories and to obtain them. Higher than other rifles. What firearms can replace it? Here we bring you the preferred firearms without M416——SCAR-L!

The prototype of SCAR-L is FNH Corporation’s bid for the US SCAR The manufacturing of firearms. The representative of modern firearms, SCAR-L has been in service since 2008. SCAR can be roughly divided into two versions. One is a light version using 5.56 bullets, the other is a heavy version using 7.62, and the game is based on a light version.

SCAR-L has a higher chance of being acquired and will be larger at each major resource point. The odds appear. Can be equipped with guns, grips, clips, sights four types of accessories.

SCAR-L bullets have the same single damage as mainstream 556 calibre weapons. The rate of fire is in the upper middle level, second only to Tom in submachine guns. Johnson, M416 and M16A4 in the rifle. However, compared to AKM, the stability of SCAR-L is significantly higher, but compared with M416, the recoil of SCAR-L is extremely apparent. Therefore, the SCAR-L firearms have more moderate properties, are not overly-topical, and are not inferior to the mainstream firearms.

Because the attributes are not particularly top-notch, they are generally used as transitional weapons. Most players will change to M416 later in the game. But its advantage lies in the simple way of obtaining, and the high probability of acquisition. Especially in the early battles, the M16A4 could not beat the melee and it was difficult to control the recoil with AKM. At this time, there was a SCAR in hand.-L will make the battle easier. 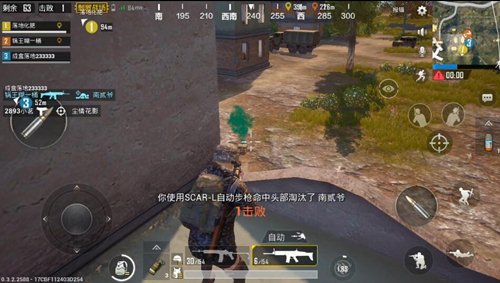 SC AR -L can support more accessories, only one butt stock than M416. In the case of full accessories, the properties are still quite good, but because the basic properties of the firearms are more moderate, they generally choose accessories with improved performance.

I believe players who have played SCAR-L can find that the SCAR-L bullet fired compared to the recoil of M416 without accessories. Obviously, the dispersion is larger. In addition to the poor control of lateral recoil force, under normal conditions of vertical recoil we can use the pull-down screen to operate the gun, which is less difficult. Therefore, the grip is recommended to select the right-angled front grip to reduce the horizontal than the horizontal recoil of the bullet. With a compensator at the muzzle, the vertical recoil at the muzzle can be reduced to some extent. With this set-up, SCAR-L’s shooting stability will be greatly improved.

Same as Compared to the 556 firearms, the biggest advantage of SCAR-L is its simple acquisition method. Although there are some differences in the properties of some firearms under full fittings, in the transition firearms are undoubtedly SCAR-L as the preferred weapon.