PUBG Mobile guide, how the four-person team should take care of each other

In the four-row mode of the stimulating battlefield, the only shortcut to the upper division is the four-person group. In the actual game, many players find that teammates rarely cooperate with the action Even if sometimes the mouth promised well, when it was attacked, it was completely difficult to fly. In fact, this kind of mentality is very normal because each person The identity of the players is the same, no one has the right to command who has ; in addition to some subjective reasons, there is an objective reason for the poor cooperation, for example, if you jump in a building when jumping, finally I made you smash bullets, I smashed the guns, everyone was not well developed, or we consumed a lot of ammunition to destroy a few enemies, and then the teammates who did not open a few shots directly rushed past the enemy box Slag is not left. These behaviors are nothing compared to malicious killing of teammates, or hanging out to retreat, but it is also disgusting enough. Most of these players are unconsciously making mistakes. Sometimes, as long as they click on the side of the voice, most people are still very reasonable. Occasionally, it is normal to encounter a few poor quality. Go to my heart.

Here is a half-day negative textbook, then a well-matched team What does it look like? Here I will create a scenario for you:

1. A good team can maintain at least two directions of view when the card is stuck, and can report the fire for the first time after the enemy is found

2. When the team members fall to the ground, there will always be teammate support nearby, as long as the enemy does not instantly fill us up,

3. When someone is going to the building, someone will always go upstairs. Someone is guarding the downstairs, and the wild team is rushing up and queuing up, or being swept away by the enemy.

4. Excellent team when entering the finals In most cases is full

5. The team will always be accompanied by the vehicle during the journey

6. A good team must have a backbone. His technique may not be the best, but he can let his teammates follow him with willingness. Advance

If a team can do the above 3 Basically, it can become a qualified and good team, and what can be brought about by good mutual cooperation? It is very simple, and the result is a huge increase in the rate of eating chicken. Here is a practical example of how to achieve a good team with a victory.

At G PortIn the war, teammate 1 was shot by two enemies and could not move. We immediately went to the vehicle to support it, ensuring the survival of teammates. One more teammate, one less enemy. 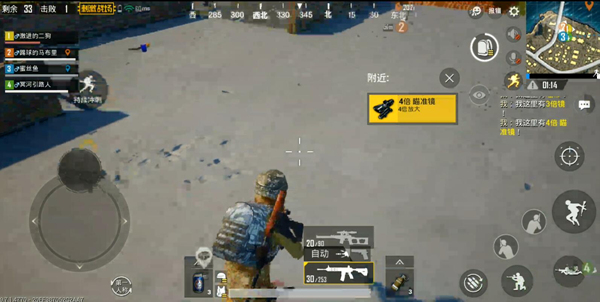 When collecting materials collectively, the distance between them should not exceed one building, so that when they encounter danger, teammates can quickly rush to rescue us or simply revenge. The advantage is that it greatly increases the efficiency of our collection of materials. We can use the chat shortcut key “There is material here” to scream and aim at the item at the same time, which can help the teammate to accurately locate the item.

In the event of an encounter, the team responsible for the assault can be charged under the cover of our sniper, which can make the efficiency of the enemy and greatly guarantee the teammate’s Security (For example, if a person is facing a gun at a distance or a close distance, because the enemy is far and near, there is always someone who can kill him).

When robbing the airdrop, teammates can also help us to shoot at the back, which allows us to easily put the airdrops in the bag.

Finally, we entered the finals with absolute advantage, and the enemy was killed by our 4 people living in a place. . In the end, the game ends with a plate of chicken.

In the actual game, mutual interaction between teammates is very important in the game. The role of learning and teammates skills can greatly increase the survival rate of their own team, thereby increasing the chances of eating chicken.